The thought of programming a project can be intimidating if it is the first time or if it's been a while since attending training.  But in reality, Intelli-Site has been written to make project programming simple, straightforward, and elegant.  This article will walk you through System Layout, adding Areas, adding RTUs, creating door constructs, and programming two simple screens.  The replication wizard and the door construct auto-creation method will be used to enhance the speed and ease of programming.  We will use a simple jail with an office area and a single pod of eight (8) cells as our example.

Forethought and planning before beginning the project programming will make the process smoother. It is important to fully understand the facility that will be managed by Intelli-Site.  It's important to know what equipment will be integrated with Intelli-Site, where it is located, and how it will be used. Consider how the user will monitor the system in Run Mode. Spend a few moments thinking about how to best organize and name the RTUs in the Project Tree.

The general process is:

Before project programming, you will need:

In Design Mode, expanding the System Layout node reveals the Corporate Headquarters node. Expanding the Corporate Headquarters node reveals an Area node. These are sample nodes.  The Corporate Headquarters node would be the name of the facility, organization, or company for which the project is being programmed. In our example project, this is the Smallton Police Station.    The Area node is a logical location to group RTUs.  Quite often an area is a physical location for the installation.  If the installation is a multi-story office building, an area could be one of the floors of the building.  If the installation is jail, each pod of cells could be a different area.  There is no best way to organize the RTUs.  Keep in mind the people that will be using the system once it is programmed.  They will need to be able to find a specific RTU with minimal effort.  The more descriptive the names the better.  Instead of naming a MAC panel MAC-4R 001, name it based on its function, Floor 1 Access Panel, or possibly an inventory designation.  What is important is that the user will be able to find the node that corresponds to the piece of hardware with minimal effort.

Add Areas and Rename Them

Add RTUs to the Areas 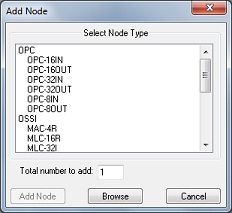 In our example, there is a MAC-4R access control panel that controls the doors in the Office Area.  In the Jail Pod, the doors are controlled and monitored by an MLC-16R, and an MLC-32I.  For the door constructs, we will create for the cell doors, we need a set of Virtual Points. 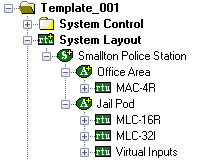 Rename the RTUs and Their Component Parts Appropriately

In our example, the Office Area has a MAC-4R that controls four (4) doors.  The default names for those doors are Door 1 Reader, Door 2 Reader, Door 3 Reader, and Door 4 Reader.  These names are not very helpful. They should be changed. When a door reader is renamed, Intelli-Site will ask if the name change should be propagated to the sub-nodes and I/O Points.  It is a good idea to let Intelli-Site do this. 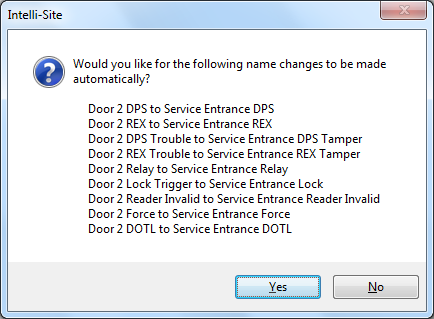 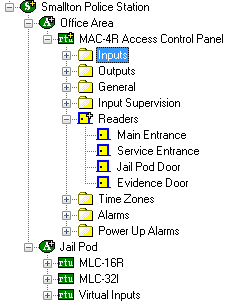 If you are curious, you can expand Inputs, Outputs, General, and Alarms to confirm that Intelli-Site has indeed renamed the I/O Points to reflect the new door names.

The Jail Pod area has an MLC-16R and MLC32I to provide the necessary controls for the jail doors.  Eight (8) of the outputs on the MLC-16R have been wired to control the jail door locks.  Eight MLC-32I Inputs have been connected to the door position switches (DPSs) for the jail doors.  Eight more inputs have been wired to provide the status of the door lock.  By default, the outputs are name Output 1, Output 2, etc.  The inputs are similarly named.  Again, the default names are not very helpful.  They should be renamed to reflect their use.

We need points that the Server will set for two alarm conditions for the cell doors in the jail pod.  That is why we added the Virtual Inputs RTU.  These two alarms are Door Forced and Door Open Too Long (DOTL).  Rename the virtual points accordingly. 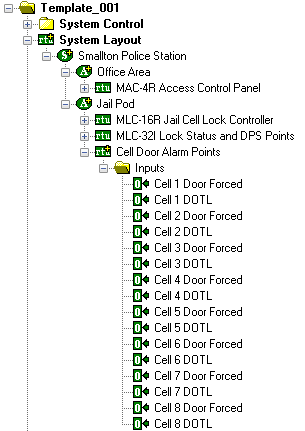 Create Door Constructs for the Doors and Door-Like Elements

Expanding the Door Control node reveals several sub-nodes: Doors, Zones, Interlocks, Call Stations, and Alarm Zones.  Each of these is a different flavor of door control.  The one we are most interested in is Doors.  It's here that Door Constructs are created.  The Door Construct feature of Intelli-Site provides a central configuration point for doors and door-like elements.  An in-depth discussion of Door Controls and the Door Construct is the subject of another article.  Here we will only show how to use door constructs.

The figure below is the Door Settings tab of door construct properties. 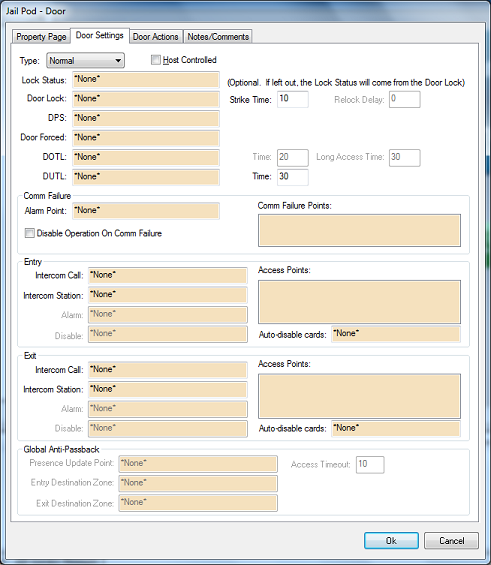 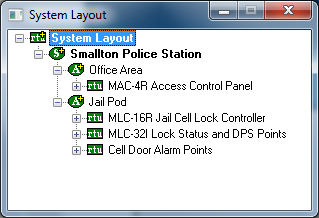 In our example, the MAC-4R Access Control Panel has doors.

Creating Door Constructs in the Absence of an Access Control Panel

Before creating a door construct, there must be a door group.

Now that we have the door group, we can add door constructs. 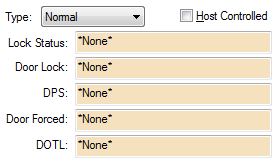 Remember that "Lock Status" and "DPS" are inputs, they come from the door into the MLC-32I, the "Door Lock" is an output of the MLC-16R, and the two alarms, "Door Forced" and "DOTL", are Virtual Points.

Note: The MAC panels can be programmed via ladder logic to control the cell doors instead of making them Host Controlled doors.  But the purpose of this article is NOT ladder logic.  Ladder logic is a feature of the MAC panel specifically.  This article's purpose is to share information about features of Intelli-Site that can be used on the majority of projects no matter the hardware involved. 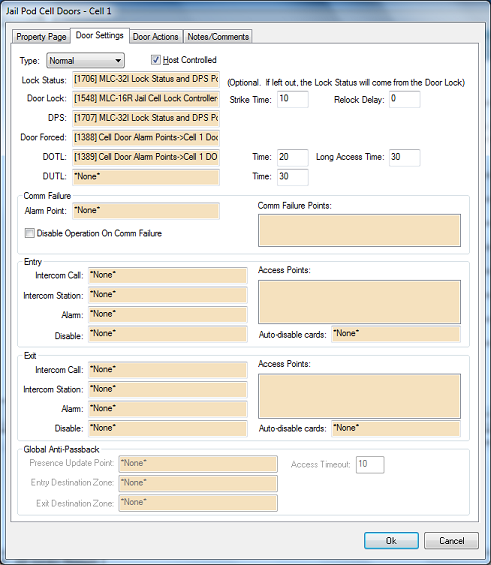 Repeat for each of the cell doors.

When all the door constructs have been added, the Tree for the example project looks like this. 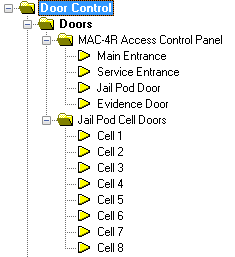 Now that we have our door constructs created, it's time to build the Run Mode screens that will let the user control the physical doors using these door constructs.  For our example project, we have two areas, the Office Area and the Jail Pod.  We can either have one big map with both areas or two maps.  We are opting for two maps which means two screens.

Before an image can be used, it has to be imported into Intelli-Site.

Importing an Image into Intelli-Site

The selected image files are now imported into the server and appear in the Tree under the new folder.

Create the Office Area Screen and Set the Background Image

The first thing we'll do is create the blank screen and add the background image of the floor plan. 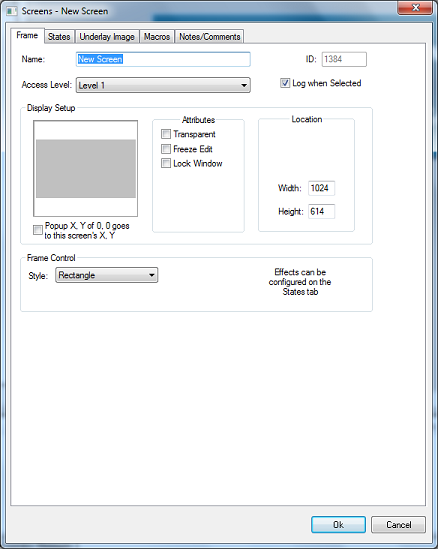 Change the name of the screen.

Click on the States tab.  Locate the Images field. 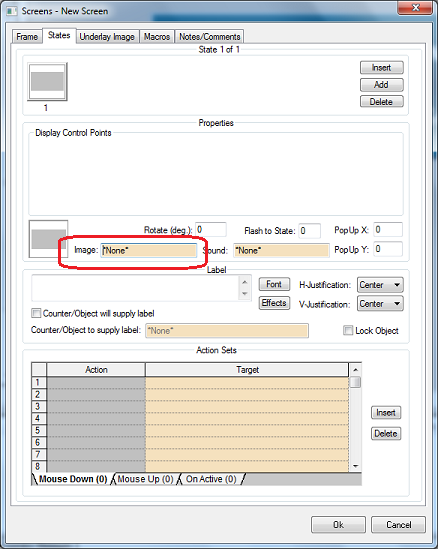 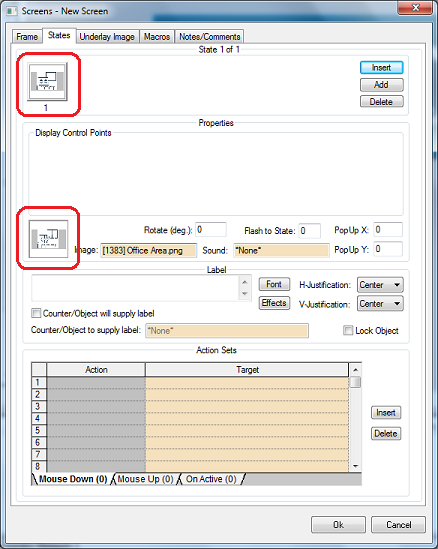 Add the Door Screen Objects to the Office Area Screen

To add the door screen objects, do the following: 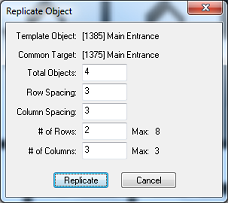 Intelli-Site locates the object in the Tree and makes an educated guess as to the number of total objects to create based on the nodes following the targeted object.  In this case, there are four (4) door construct objects including the target. 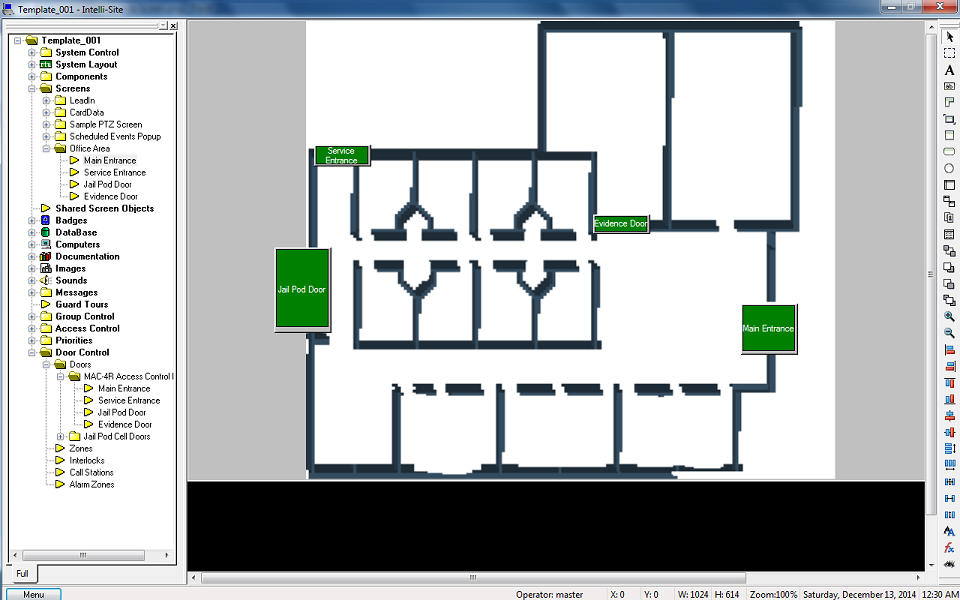 The jail pod screen is created following the same steps used in creating the Office Area screen.  Only this time, for the purposes of the example, we are going to customize the door screen object before it's replicated. 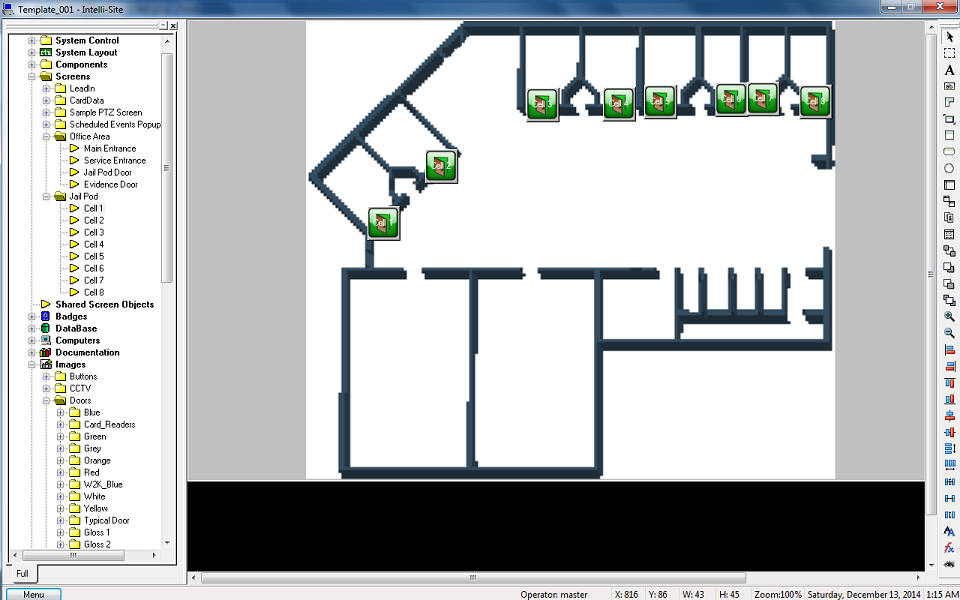 All that is left are the finishing touches.  Just because these screens have been created, doesn't mean these screens will ever display.  Buttons need to be created and programmed and placed so that the screens can be reached. Navigation buttons are a good candidate for Shared Screen Objects.  Quite often they are used on more than one screen.  As a shared screen object, the programming is done once and used in multiple areas.  We will create two buttons, one to display the Jail Pod screen and the other to display the Office Area screen. 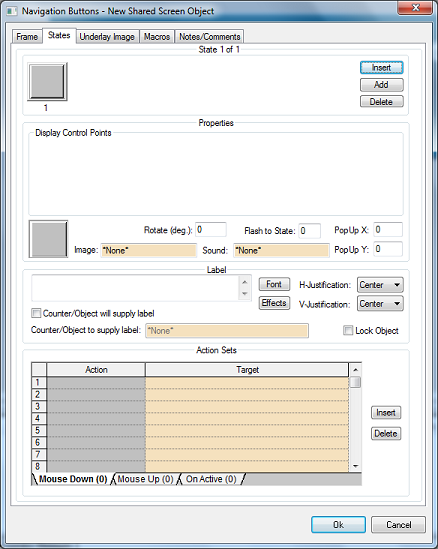 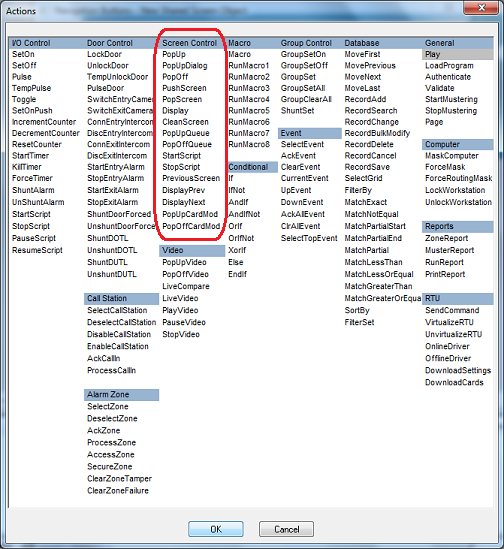 This is all that actually has to be done, but it can be frustrating to click on an object and not know if the click was successful. It is a good idea to give the user feedback.  One way to do so is to have an action to play a sound like a click.

The button may not be the correct size.  To change the size of the button, you must edit the shared screen object.

At this point, you can create the second shared screen object to bring up the other screen when it is clicked, or we can copy and reprogram it.

While holding down the Ctrl key, drag the shared screen object to its parent node and drop it.  The Replace Programming wizard appears. 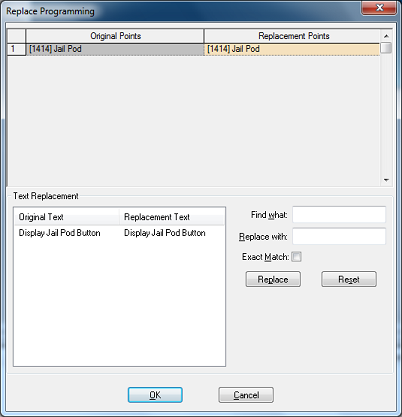 Note:  If Intelli-Site prompts to "Continue with Move?", click [No] because the copy was unsuccessful.  Try again.  Make sure to hold down the Ctrl key and then hold down the right mouse button.

There are now two shared screen objects, one for each screen.

Let's add the shared screen objects to the various screens.  We will add both buttons to the Lead-In screen and one to each of the other screens.