Compass hardware and Intelli-Site ES/GS can be configured to provide elevator control. The Compass Intelligent Reader Module (IRM) can be configured to control other outputs, not just readers using the Compass Intelligent Output Module (IOM) panel.  These outputs can be used to control elevators, allowing the passengers access to specific floors based on access levels that can be assigned to cards.

When an IRM is configured as an Intelligent Controller Module (ICM) and coupled with at least one slave IOM, the Compass hardware can control 16 relays per IOM board.  Those 16 relays can control one elevator car and 16 floors, or two cars with the relays split between the two cars in any combination, or three cars, or four, etc. The IOM is called a slave IOM because it is attached to the ICM via a Remote Controlled Output (RCO) communication board attached to the ICM panel.  Each ICM can have up to seven (7) slave IOM panels. The relays on the IOM are set to "Normally Active" and the elevator buttons are wired through the NC contacts.  This makes it fail-safe.

This article will walk you through configuring the Compass hardware and Intelli-Site ES/GS to provide elevator control.

NOTE:  Elevator control is not a basic function of access control and as such is not available with Intelli-Site CS.  You must use Intelli-Site ES or Intelli-Site GS with this feature.

There are two parts to setting up elevator control:

Once the Compass panels and Intelli-Site software are configured, Access sets should be assigned to cardholders to allow them access to the proper floors.

The minimum hardware setup is one ICM and one IOM slave panel.  The address for the ICM must be a multiple of eight (8); therefore, the address of an ICM can be 8, 16, or 24.  The addresses for the IOM slave panels for an ICM are the next 7 addresses.  If the ICM is at 8, then the first slave IOM address is 8+1=9, the second slave IOM is at 10, the third is at 11, etc.  The seventh slave IOM is at 15. We have to minimally set up the Intelli-Site software first because Intelli-Site will load the proper firmware and configuration to the Compass panels.

Set Up the ICM Panel 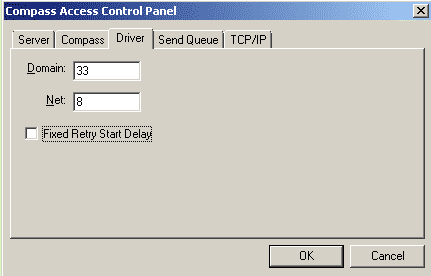 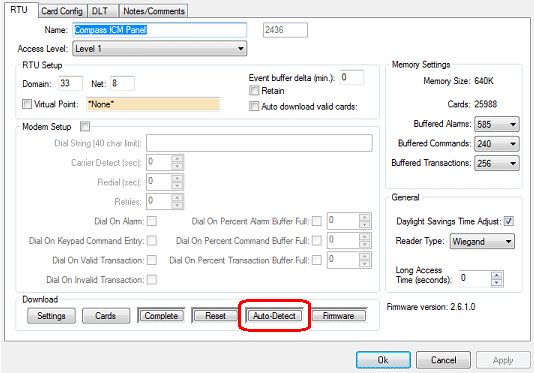 Intelli-Site will detect the ICM at address 8 and load the ICM firmware.  When you hear the download complete message, you may move on to the next step.

Set Up the IOM Slave Panel(s)

When the download to the IOM Slave Panel is complete, the panel will drop offline and the DriverService will display.

This is expected.  The IOM Slave Panel is now configured to communicate with the ICM once it is connected via the RCO communications board.

NOTE: If the RTUs were "virtualized", please remember to "unvirtualize" them at this time.

Now we can define the access levels for the outputs on the IOM Slave Panels and assign them to cardholders.

Just like Readers on Doors fire relays to open the door, the ICM must be configured to fire the correct output relay.  In fact, more than one relay can fire at a time.  Which outputs fire is defined in an RCO Group for the ICM.  Each ICM will have its own set of RCO groups.  An RCO group is not directly assigned to a cardholder.  The RCO group is associated with an Access Level which is assigned to cardholders via Access Groups and Access Sets.  The RCO group tells the Reader which outputs to fire when a valid card read occurs.  To define an RCO group we need to have:

When a cardholder who has been assigned an Access Set that contains the specified Access Level scans his/her card during the appropriate time period, he/she has access to the floors associated with the outputs in the list defined in the RCO group.  In reality, this is exactly the same behavior for an IRM or ICM.  The only difference is to what the outputs are wired: a door or a floor.

Before an RCO Group can be created, any time codes and access levels associated must be defined.  For example, some elevator passengers have access to the top two floors during regular business hours.  We need a time code for "Regular Business Hours" and an Access Level for the ICM for the "Regular Business Hours" so the ICM knows what Access Level to look for when a card is read.  The place to add Time Codes, Access Levels, and RCO Groups can be found by expanding the ICM in the tree. 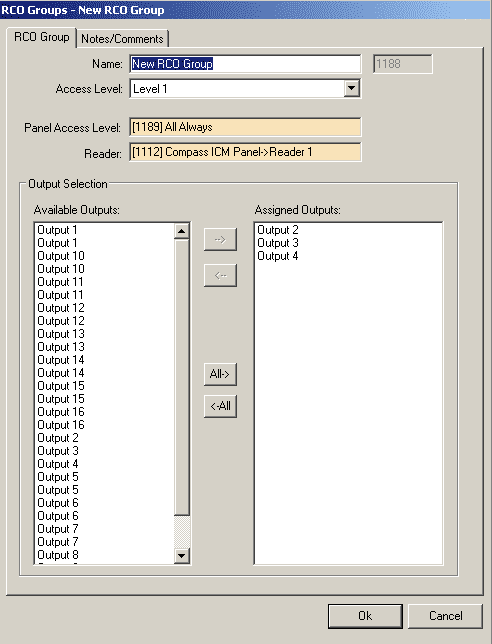 NOTE: As always, it is good practice to name objects logically so that you know exactly which object it is, what it controls, and where it is located on your site.  Name the RCO Group appropriately and name the outputs appropriately as well.  To name the outputs you must bring up the Properties... for each of them.  We suggest you name them to match the cab and floor. 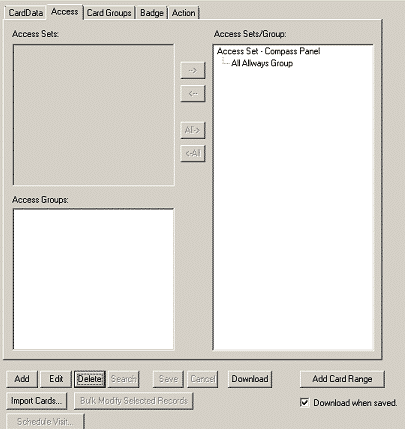 Congratulations, you have configured your IRM and IOM Slave Panels to control an elevator and have granted cardholder access.